Let me start by saying that I surprised myself today. I thought I was be mentally blocked and physically dead, for many reasons. Have to say – my pace was acceptable, and my time decent. And that included a stop for a quick piddle at about mile 10. My Nike+ said 9:36 pace, 2:02:00, fastest 13.1 miles. Not sure about that… and… somehow I managed to run a total of 14.57 miles… Anyway, gotta check my results on NYRR.

So here’s the break down…

The morning started with me walking to the park… it was chilly but I was okay with my layers and such. Unfortunately I just missed the 6 to 59th Street and I wasn’t going to take a cab. So I walked.

Baggage was outside the park along 59th Street and really was efficient because volunteers were just collecting the bags and semi-sorting. They were just throwing them in a bunch of UPS trucks to deliver them downtown to the finish area.

Once inside the park, there were portable security checkpoints that some people walked through and others got the detector wand scanned over the body. That was a new experience for me, security at a race. Helicopters above yes, but not the body scan. But it was a big event and better safer than not.

Corrals were set up in three waves. I was in the third wave with the 20,000-29,9999 crowd of course, with average runners. We had a little bit of a wait in the frigid and windy air since the second wave was just starting. Time seemed to move quickly and before I knew it, my section was slowly moving to the start!

My face and hands were numb for the first couple of miles. Mile three I started warming up but then my LCL (I assume) started giving me grief. This pain occurred mostly while running on some uneven pavement, particularly at Central Park North then later on the bumpy streets downtown.

Once back in the park and after the freaking hills, we exited onto 7th Avenue and ran through Times Square to 42nd Street. That was fun because there were some bands playing and lots of people cheering along the gates. 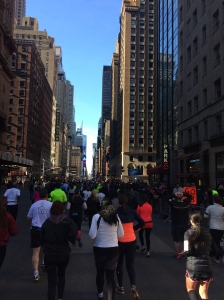 Tried to get a shot running toward Times Square area

As we turned towards the Hudson on 42nd Street, the wind picked up and once again it was cooooold! Damn! Dust flying in my eyes, gusts pushing me back….brrrrr! But upon turning onto the West Side Highway and out in the open, the sun was finally shining on us. That was lovely! The remaining 5 miles were in the sun, with some optional shade.

West side, heading toward downtown. Freedom Tower on the left, Chelsea Piers on the right.

I didn’t see the mile markers for mile 9 or 10. Usually that’s around my mental wall time. But today, I just breezed through and when I saw the mile 11 marker, I told myself to get my butt in gear! Those last two miles had to make up for the bathroom break I took, which I usually don’t!

Mile 12 was unique – running through the entrance of the Brooklyn Park tunnel for the last mile and coming to surface by the South Street Seaport. And finally – finish line around the corner on Water Street! That was a lot right?!

Well let me tell you – this usual mental block I expect between miles 8 and 10 as mentioned, I didn’t even notice today – nor did I really long for the next mile marker at all – because there are so many distractions along the route. People, dogs, bike riders, cars, trees, the river, flashing lights, tall buildings. sports complexes, billboards, boats – I think I was just so distracted I didn’t even really think about running that much (except during my somewhat more than occasional knee pain).

Maybe my ADD is useful after all! Be careful and happy running!

3 thoughts on “Running With ADD”