I’ve been focusing diligently on being a kinder person, particularly to strangers, as a way to spread goodness in these turbulent times. It’s been going pretty well, I’d say.

So today I was excited to go running in the park, first time in at least a month. One of my most favorite things to do. It was nice to get out and be with other runners even in the chilly morning air.

I was about 2/3 through my run and I was having an impressive internal monologue, my mind beginning to clear as I rounded the bottom of the loop.

And then I see them. Three abreast and I can tell there’s no intention of moving over. 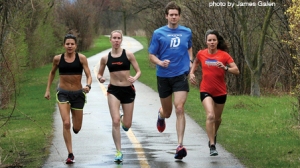 As much as I love the running community, the running pack mentality drives me crazy. When you see someone running toward you, isn’t it common courtesy to share the path? Maybe move behind one of your pack members?

Well it’s not. I moved over to the outside line, adjacent to the bike lane so the three could stay in their formation. Because I’m practicing kindness and patience, I decided it was not a good idea to slam into the side of her (which I’ve done), but instead just included in my monologue that she doesn’t know any better, that she is unaware of any sort of space considerations to others on the course… sigh…

Of course I didn’t let her lack of regard for another runner ruin my bliss, so I kept on like nobody’s business. I think about these things runners do, not because it interrupted my run or thoughts much, but because I know this is a common practice of hers and many others. A thoughtless practice.

Come on people, move! I’d rather smile at you while you move over than scowl because you didn’t. 🙂