He had a name on his sign. So I called him by his name.

“Hi Matthew”, I said. “This is for you.” And I handed him a water, then a pretzel from the corner vendor.

“Thank you”, he responded. “Wow, thank you.” He wasn’t expecting the pretzel, only the water. 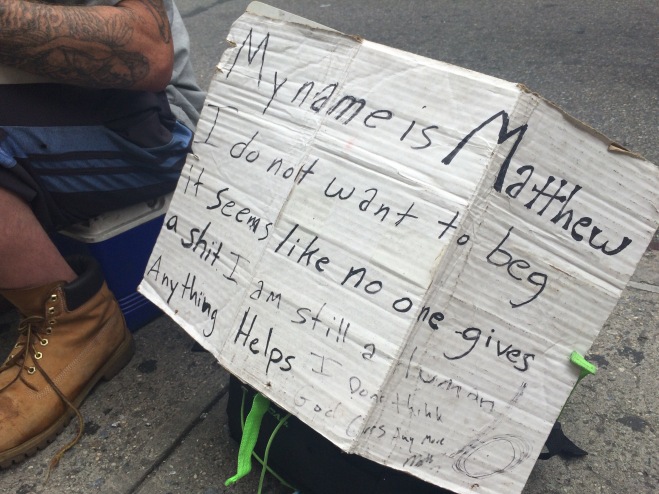 I appreciated that Matthew’s sign represented honesty and truth. He’s right. Most people don’t give a shit, however there are many that do.

I think it was important that Matthew shared his name, making him more of a person to those passing by. Putting a name to his dirty face definitely makes passersby remember him; I am writing about him after all.

I appreciated the thanks I got from Matthew, and that he wanted to converse. He shared a little about his hardship, whether it’s true is another story. But I appreciate that he offered me some information in return for the food I had just given him.

As I walked away he said he thanked me again and said that he didn’t know what God had planned for him. Thinking back I could have responded that his situation really depended on what he has planned for himself.

But maybe it’s best I didn’t say anything.

He just wanted to be heard, so I listened.