I like asking myself this question often. Just for fun – but this is indeed a very powerful question. I ask myself “what if” not because I am unsatisfied with my life, but because it’s like writing your own Choose-Your-Own-Adventure novel! Just think about all the multiple avenues your life could go!

I think the “what ifs” are sometimes equated with unhappiness, wishful thinking or living an unfulfilled life, but you have the power to turn those “what ifs” into something meaningful – if you want them to! 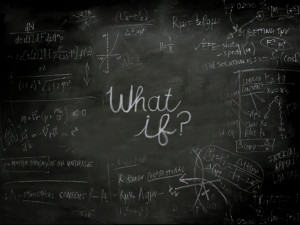 … I moved to Boston instead of New York? Would I like it better? Would I still be there?

… I crossed this street instead of that street? Would I have gotten on the train I needed? Or would I have been hit by a cab?

… I worked under my psychology degree and never went back to school for education? Would I be bored at my job?

… I invented the next app or game that everyone spends their money on? Would I be better off?

… I didn’t become a teacher? Would I have gone back to school?

… I had a kid? Would I live in New York in an apartment?

… Jill and I had gone to Greece to teach English? Would we be drinking ouzo and eating olives in Santorini right now?

… I left 5 minutes earlier this morning? Would my day be different, or the same?

… I decided to move to Paris this summer? Would I eat croissants every day?

… I went to the movies tomorrow instead of work? Well – that’s easy – I don’t have to work!

… I stayed up all night watching TV? Would it matter?

Hhhhhmmmm. What if… I didn’t write this post? Would you be asking yourself “what if”? Or would you even care?